As designers and planners, our design process begins by learning and analyzing the physical aspects of the land – it’s topography, water edges, views, aspect, natural habitat etc., as well as its cultural history; First Nations, European settlements, family farms and ranches and community aspirations etc. Through this kind of extensive research, we can begin to answer the question ‘what is inherently unique about a place?’.

Our team were excited to apply this process to one of our new projects – Tranquille Master Plan, a waterfront development in Kamloops. Through our research we unearthed many interesting facts including photographs and plans showing Tranquille’s rich history.

Here are some of our findings:

Tranquille’s Rich History
From the 1860s to early 1900s, Tranquille was owned by the Cooney and Fortune families, who ran successful ranches for cattle, horses, hay and a wide variety of fruit orchards. This image, taken in 1906, shows the cattle roundup on the ranch with the existing farm buildings in the distance. 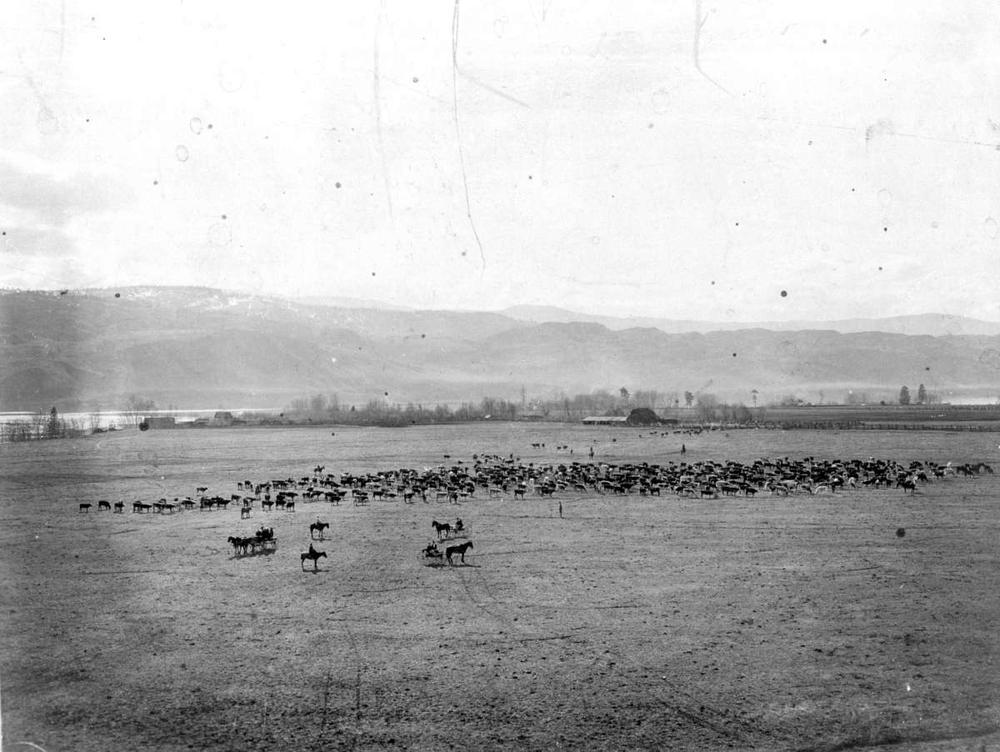 The popularity of Kamloops increased with the arrival of the Canadian Pacific Railway (CPR). When the CPR was built through Tranquille, the demand for beef rose – profiting the Cooney Ranch. To support the growth of Tranquille, Cooney donated several hundred acres of his land to the CPR. This undated image shows the original Tranquille CNR station.

After the BC Anti-Tuberculosis Society purchased the Fortune and Cooney lands in 1907, the treatment facility grew in popularity due to its favourable climate – an important factor in early tuberculosis treatment. The treatment facility was eventually transferred over to the Province of BC in 1921. This land ownership map from 1922 shows the sale of lands under the 1872 Dominion Lands Act, a law that encouraged settlement for a low price in hopes to prevent the area by being claimed by the United States. Areas in hatch show lands purchased by the Provincial Government for the expansion of the Tranquille Sanitorium. 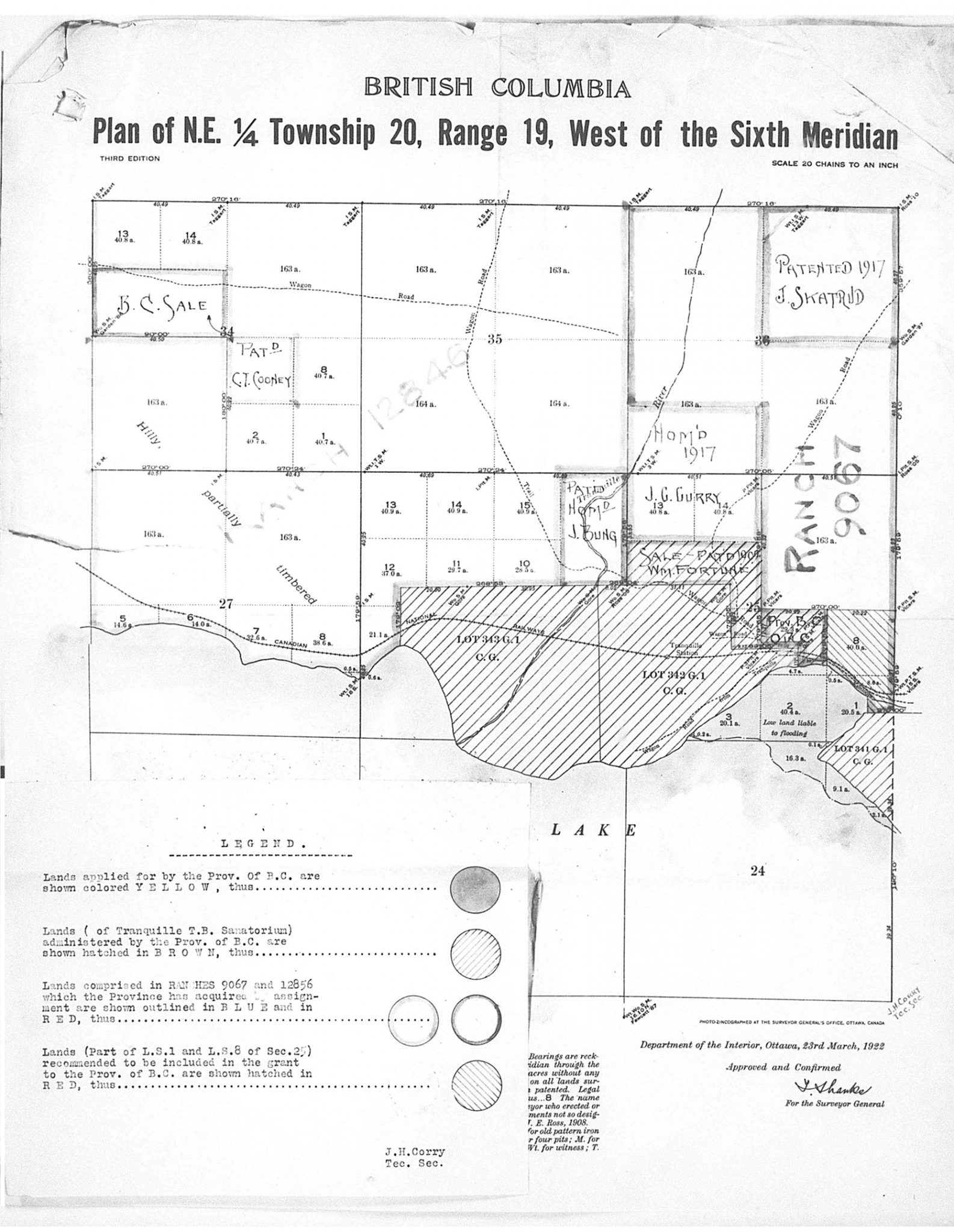 In 1922, the Cooney’s sold the ranch and lands to the provincial government to begin construction for the King Edward Sanitorium (also known as the Tranquille Sanitorium) for tuberculosis patients. This undated image shows the “Sunken Garden” of the Sanitorium, located in the West Pavilion, where residents enjoyed a stroll. 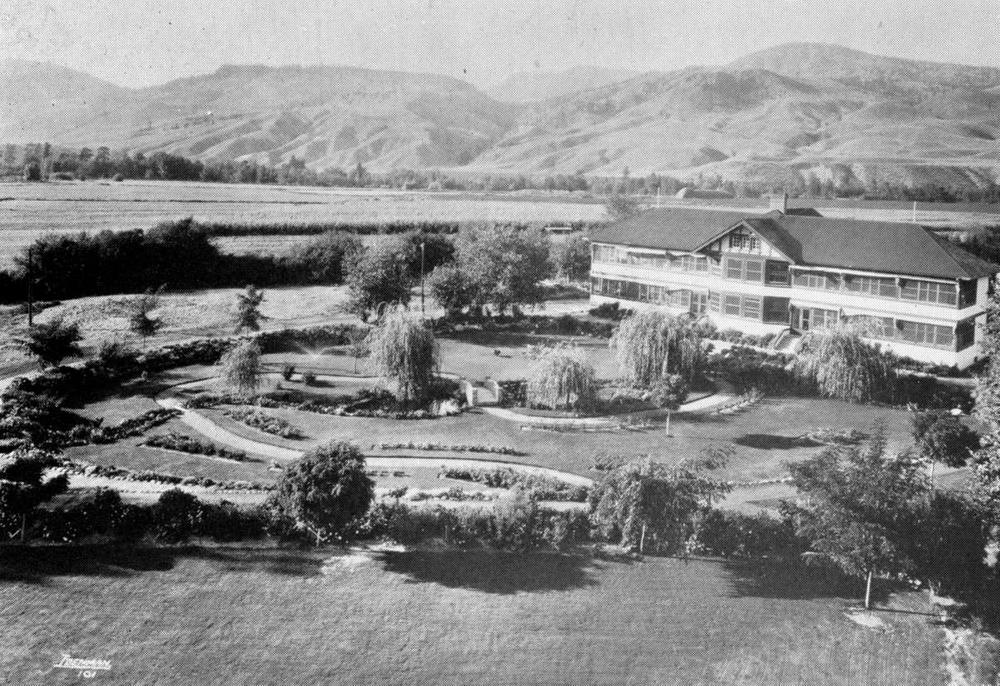 The sanitorium operated within a fully functioning community – the site had its own gardens, orchards, farms, and other farm food operations. The surrounding Tranquille Farm was producing most of the food and dairy products for the 1,000 staff and patients working and living at the institution. This image shows an aerial view of the Tranquille Sanitorium in 1928.

Our research eventually led us to the UBC Rare Books and Special Collections room, located in the basement of the Irving K. Barber Learning Centre.

Nestled within 25 insurance maps of Kamloops lies this detailed 1930 Fire Insurance Plan of Tranquille. In addition to its intended use, this plan shows surveyed building footprints, pipe location and building uses during the first few years of the Tranquille Sanitorium. 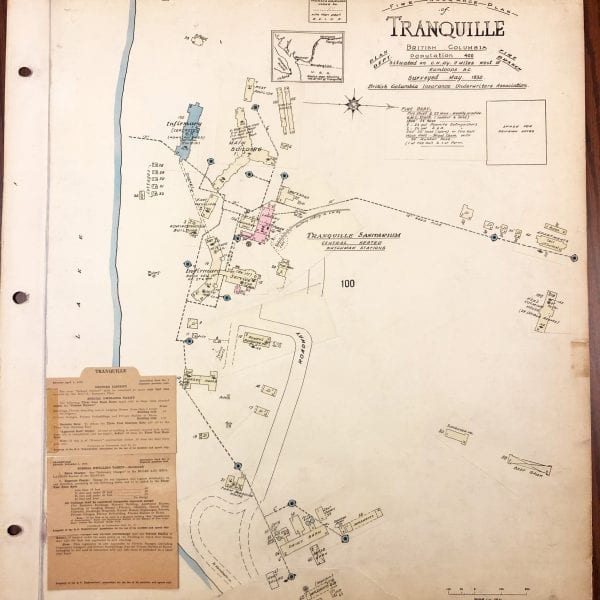